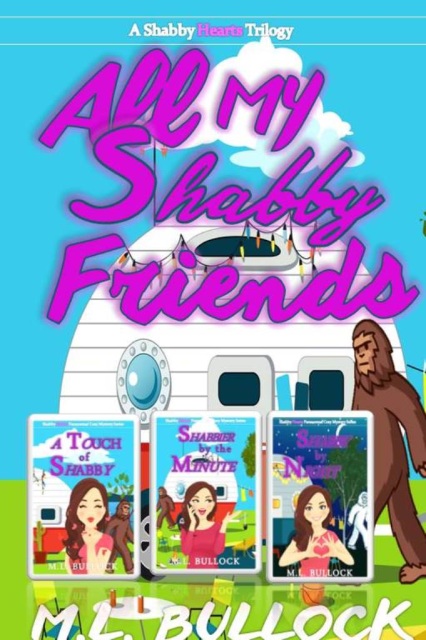 They're not crazy! They're my family!

Aunt Mavis hands Arcadia the keys to the family business, the Shabby Hearts Trailer Park and Campground, but there’s a catch. It’s only two weeks before tourist season begins and the place is in major disrepair. Lake Dennis isn’t the hottest spot on the “Redneck Riviera,” but Arcadia has plans to change all that. That is, if she can keep her dysfunctional family, a nosy Bigfoot and an overbearing television reporter in check. Add to the madness Arcadia’s arrogant ex-boyfriend and an attractive newcomer who's caught her eye, and you've got a sure-fire recipe for disaster--and fun!

When Arcadia's cousin Tiffany becomes Lake Dennis' newest Bevvy Jane salesperson, the Shabby Hearts Trailer Park is turned upside down. Lipstick, makeup and face tape become hot commodities, and the competition for sales gets fierce. To make matters worse, the body of the Bevvy Jane Sales Director is found dead in the tomato garden. Naturally, some residents blame the murder on Bigfoot. Arcadia's ex is the new sheriff and pins the crime on Tiffany. If Arcadia wants answers and has any hope of setting Tiffany free, she'll have to get to the bottom of Shabby Hearts' latest mystery.

Things get weirder when Aunt Mavis takes up her own shabby sideline. But at least she hasn't killed anyone. Not yet, anyway. There's nothing like a good curse to bring the Shabeaux family together. Aunt Mavis is determined to help Arcadia weather the Wolfsbane Curse and learn how to live with her new irresistible qualities. That means keeping unwanted visitors at bay as the full moon approaches.

Tiffany decides to renew her pageant aspirations and her rivalry with her cousin Kitty, and Arcadia gets dragged along for the ride.

Can Arcadia and Aunt Mavis solve the mystery of who is the rougaroux...and keep Arcadia alive in the process?