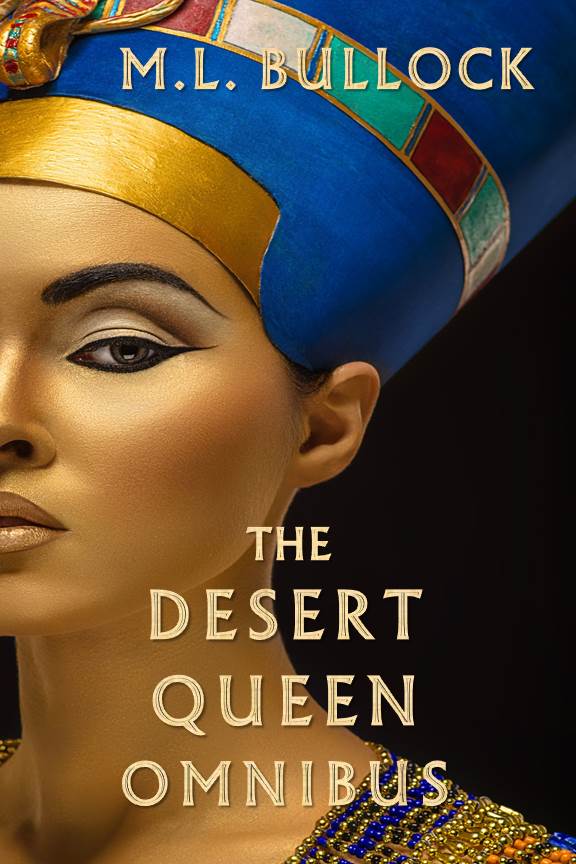 FREE SHIPPING! GET YOUR AUTOGRAPHED COPY!

This exciting omnibus contains all four of M.L. Bullock's Desert Queen books--now in one big bundle!

Twin daughters of an ancient Bedouin king struggle under the weight of an ominous prophecy that threatens to divide them forever. Royal sibling rivalry explodes as the young women realize that they must fight for their future and for the love of Alexio, the man they both love. The Tale of Nefret chronicles their lives as they travel in two different directions. One sister becomes the leader of the Meshwesh while the other travels to Egypt as an unwilling gift to Pharaoh.

From the desert to the throne room, The Tale of Nefret is the first book in The Desert Queen series, the fictional story of Nefertiti, Queen of Egypt. From the Red Sands of Egypt to the Palace at Thebes!

With her tribe in turmoil and her twin sister missing, Nefret surrenders herself to the will of Egypt and the calculating Queen Tiye. When the Egyptian queen’s intentions for Nefret become clear, the Desert Queen realizes it will take all her wits to win--and stay alive. The Falcon Rises chronicles the evolution of Nefertiti as she struggles to claim her place at Amenhotep’s side in history.

Who Will Be Egypt's Next Great Queen?

The Kingdom of Nefertiti

When Nefret, the mekhma of the Meshwesh, leads her people back to their homeland of Zerzura, everything changes. Forced to make a deal with the determined Queen Tiye, Nefret abandons her tribe and the man she loves to obey the queen’s command. As she takes her place at the Egyptian court at Thebes, she quickly realizes that fate is not through with her yet. A new enemy with a beautiful face is revealed, and Nefret--now Nefertiti--must fight again to keep her place at Amenhotep’s side.

Set against the backdrop of the grand courts of Egypt, The Kingdom of Nefertiti chronicles the rise of Queen Nefertiti.

The Song of the Bee-Eater

Akhenaten and Nefertiti have done the impossible: they've led Egypt into a new age centered around the worship of the Aten. But not everyone is happy about the new Golden Age. Enemies arise, inside and outside the palace, and Nefertiti must fight to keep her children safe and her kingdom intact.

Akhenaten breaks her heart, and she loses someone close to her. After the Great Queen sees a strange omen, she prepares to abandon her crown and imagine life beyond the shimmering courts of Egypt.

Can the Egyptian queen Nefertiti survive?